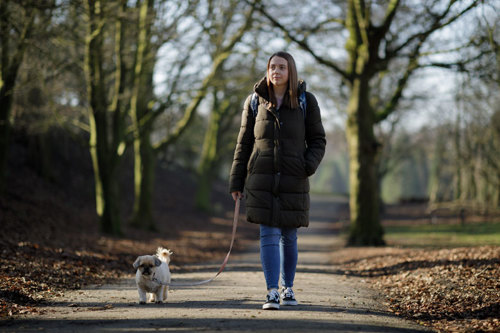 Before I was diagnosed, I felt frustrated. No matter how much I told doctors about the level of pain I was in they kept saying it was growing pains, which I knew it wasn't. I was worried, I had no explanation for why I was feeling this pain and stiffness, or why I was so fatigued.

At its worst, the pain is excruciating. I have been in floods of tears with the pain at two, three, or four in the morning, not knowing what to do. This has a huge psychological effect, it can make me feel like I’m not strong enough to cope and I just wish to be pain free for a day.

But the hardest part is the fatigue. Sometimes it feels as though there are weights attached to my limbs, and it can take every ounce of energy just to walk down the road or to the fridge. You can find yourself being mentally fatigued too, when it feels as though there's a block in your brain, the words want to come out, but they just won't.

Support is so important. My family are amazing. When my injections are due my mum makes sure there's a can of my favourite lemonade in the fridge to help with my nausea. My fiancé Ben is my rock, he sees me when I'm at my worst, when the pain and fatigue are really bad. He has been there from before the diagnosis, and he helped me fight for that diagnosis. I have some amazing friends too who send me lecture notes if I'm not in uni so I don't fall behind.

Despite the AS, I like a sense of normality – of just being a normal 23 year old, as best as I can. I go to uni, I still work, I go to the gym three times a week. Boosting your mental health and keeping positive does help. You also need to listen to your body, you are the only person who knows when you need a rest. Talking to others with AS, people who really understand what you’re going through, that can make a big difference.

A big thing for me was to continue with my third year at university and to graduate. I have had a lot of obstacles this academic year – illness, pain, flares, medication and hospital appointments, but it has all just driven me to carry on and finish.

I have been told to rethink my career choice of teaching as the pressure and workload may have a negative impact on my AS, but these opinions have just made me want to become one more. I know my limits, but I also know that I want to work with children and young people, I always have.

AS won't stand in the way of my aspirations, it just might be that I have to take a different path to get to my end goal, but that's ok.