Biologic drugs, like adalimumab, have improved the lives of almost 2 million people in the UK – and one of these is six-year-old Lara.

The good news is that Lara is now in remission after taking adalimumab, which was discovered thanks to one of our research trials.

Lara’s father, Tom, talks honestly about the ups and downs his family has faced, his gratitude for arthritis research, and how he’s feeling more hopeful about the future...

“Lara has juvenile idiopathic arthritis (JIA). There are a few different types, but she's got oligoarticular. That’s when you’re diagnosed and have it in less than five of your joints. Lara was diagnosed just after her second birthday, and we were lucky we got quite a quick diagnosis. Quite a lot of children take a long time to get diagnosed.

"Arthritis affects your joints so her knee swelled up to twice its size and she couldn’t walk on it. She was crying with pain, she was hobbling around, and she wasn't mobile. When the rheumatologist diagnosed her, we found out that she had it in her elbow as well, so she had a lack of movement there too.

One of the other surprising things was fatigue. When she was having a flare, there were times she would sleep for around 14 hours, and you could hardly wake her up. That was quite hard on her.

"Thankfully her joints weren’t affected for too long. It was about a year. She had a few steroid injections, but you can’t keep doing that because they can eventually cause damage. Then she started having methotrexate injections and they seem to have kept the joints under control.

"Around the same time, we found out that Lara had uveitis, which is inflammation of the eye. This has caused her so many more problems.

"She had regular eye appointments because she was at risk of uveitis because of her gender, her age and because she was diagnosed with oligoarticular arthritis. It was fine at the start but then they found that she had a flare-up in her eyes. It was bad in one eye and not so bad in the other.

"It was causing her cataracts and her vision went blurry. We tried eye drops and steroid eyedrops, but they didn’t help her.

"Next, she was given a drug called adalimumab. It took a couple of months, but that finally got the inflammation in her eyes under control.

"Then it was a case of trying to fix the more permanent damage. She had cataract surgery, and she had the lens taken out of one of her eyes. She now has a daily contact lens too.

"Some of the eye drops help the inflammation but then increased her eye pressure. She got glaucoma from the high eye pressure and had to have more surgery to help. We’ve also tried eye patching, and she’s got different glasses which turn into sunglasses in bright light as well.

"One of the tricky things was that she was our first daughter, so we had nothing to base it on. She was also diagnosed so young at two when she hasn’t been walking for that long, and you don't know what they’re like at running, jumping or climbing yet.

"You could ask ‘is your eyesight blurry?’ but, at that age, they don’t understand what ‘blurry’ really means.

"We’d ask her ‘does anything hurt?’ but she might be used to that because that’s how she’s been feeling since she was two years old.

"Now she’s six and a half and she's way more communicative so she can tell us if something hurts. It’s easier now because she understands her condition and what happens.

What are some of the common myths or misconceptions you’ve faced?

"There are quite a lot of myths and misconceptions about arthritis. Many people don't know that children can get arthritis. I didn’t know that beforehand.

"Uveitis is a separate condition from JIA, but they are linked. Again, I had no idea of that beforehand.

"Trying to explain to people that Lara has arthritis and it’s giving her cataracts can be hard. I think people think it’s just to do with bones.

What advice would you give other parents? 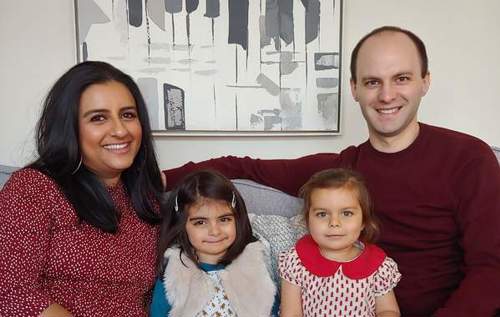 "If I was to offer advice to other parents, I would say that it’s essential to get organised. It’s worth chasing and checking if appointments are booked or medicines are going to be delivered. We’ve got spreadsheets and calendar reminders.

"It’s like a second job sometimes but that bit has got much better as we’ve gotten more used to it. Now, she's in medicated remission there are fewer appointments so it’s so much more manageable too.

"It's also important to get as much as you can from family and friends because it's tiring and stressful.

"You need to look after yourself as well. If you have a partner, work as a team and try to take some respite when you can.

"There are some great Facebook groups out there where you can ask questions and get answers. Remember there's always someone who's gone through the same journey as you who can help.

"There are also Young People and Family Services. We’ve always wanted to go to one of the residentials with Lara and meet other children with JIA. That’s something I’d like to do in the future.

Find services in your area

Looking to the future

"It’s been a bit of a rollercoaster journey. There have been ups and downs but we're in a good place now. The future is looking more settled and manageable than it did a year and a half ago.

"We feel more positive about the future now. You always know that the adalimumab might stop working, and then you might have to move on to another drug. But we’re just hoping it works for as long as possible, if not forever.

When I think of the research, I can’t think of a better word other than ‘grateful'.

"I really think she probably would have gone blind or partially blind because the uveitis was going to affect both eyes. I’m just so grateful to the researchers and the charity for funding research into arthritis in children.”

You can help make the next breakthrough happen