Research funded by Versus Arthritis led to the development of a new treatment to repair damaged cartilage in early-stage osteoarthritis called Autologous Chondrocyte Implantation (ACI), which is now available on the NHS.

Marianne, who was treated with ACI, said “The difference this treatment has made to me is incredible. I can’t imagine where I would be without it. It has changed my life and I feel like I am back in control again”.

What is osteoarthritis of the knee?

Osteoarthritis is the most common form of arthritis, affecting approximately nine million people in the UK. The knee is one of most frequently affected joints, but it can also affect the hips, back, feet, and hands.

Why was a new treatment needed?

The surfaces of bones in joints are covered with cartilage, which absorbs the impact when people move. Cells that make up cartilage are called chondrocytes.

When cartilage is damaged as a result of injury or osteoarthritis, chondrocytes cannot repair themselves well. This can lead to long-term pain and loss of mobility, severely impacting quality of life.

While surgery is a good option for some people, a knee or hip replacement is a major operation and the artificial joint typically lasts about 20 years, which means that younger people may need more than one replacement surgery during their lifetimes. In addition, not everyone has a good outcome from their joint replacement.

At Versus Arthritis, we never stop looking for better ways to treat osteoarthritis. That’s why we funded researchers to investigate new ways to repair damaged cartilage.

What is Autologous Chondrocyte Implantation?

Autologous Chondrocyte Implantation (ACI) involves the removal of a small sample of tissue from an individual’s joints. This tissue is then used to grow a fresh supply of cartilage cells in a laboratory. Around three weeks later, these cells are returned to the damaged area of the joint in another operation, where they form new cartilage.

This procedure usually involves a short hospital stay of a day or two, followed by rehabilitation and physiotherapy as an out-patient. Someone who undergoes ACI can expect to resume full everyday use of the joint within three months and can start being more active (including sports) around one year after treatment.

ACI has been shown to improve the symptoms of osteoarthritis, including pain and mobility. It can also slow or stop osteoarthritis developing, delaying or preventing the need for joint replacement surgery. This makes it particularly useful for younger people with early-stage osteoarthritis.

What role did Versus Arthritis play?

ACI was originally developed by scientists in Goteborg. A group from The Robert Jones and Agnes Hunt Orthopaedic Hospital at Oswestry (together with the Orthopaedic Institute and Keele University), led by the late Professor James Richardson, travelled to learn about this procedure and on their return began developing ACI treatment in the UK.

We funded research conducted at the Tissue Engineering and Regenerative Therapies Centre Versus Arthritis, led by Professor Sally Roberts, to understand the benefits that ACI can offer. This research showed that there are a number of factors – such as a person’s age, gender and number of previous surgeries – that can affect how successful ACI is. That gives doctors valuable insight into deciding which people should be offered this procedure.

Evidence from these studies has been pivotal to the approval of the ACI procedure by the National Institute for Health and Care Excellence (NICE) for use in people with small areas of cartilage damage or early osteoarthritis.

Professor Sally Roberts, who leads this research and featured on BBC One’s The One Show talking about ACI said: “This treatment can make a difference in delaying the onset of osteoarthritis, particularly in younger people who have small areas of cartilage damage. While the procedure isn’t suitable for everyone, it shows the positive impact of early intervention and the importance of understanding the condition at all its stages.” 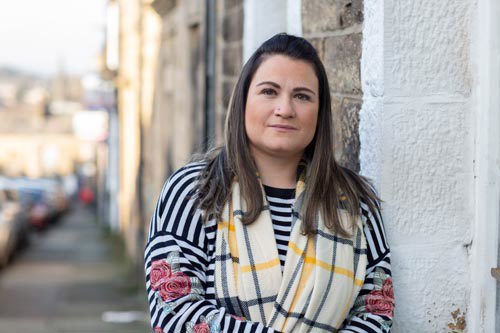 Marianne was diagnosed with early osteoarthritis when she was 29 years old and working as a personal trainer. She had ACI treatment for her knee as part of the ASCOT trial.

Marianne had developed pain in her knees, but she didn’t know she had osteoarthritis until her knee “completely gave in and I collapsed underneath it.

I went to the hospital and it turned out I’d fractured it. That’s when they told me I had early-onset osteoarthritis. I was in shock; I didn’t realise you could get it so young.”

Despite working with a physiotherapist, trying acupuncture and ultrasound, and even taping her kneecap into place, nothing brought Marianne relief for long. Eventually, she had to give up her job as a trainer.

Marianne went back to teaching, which she’d trained for before pursuing her fitness career, but that also became too difficult – crouching down to do activities with children had Marianne in agony.

The impact of her arthritis reached every part of Marianne’s life. “I was so low, I was having counselling. It was too painful to drive; I couldn’t go to the gym and I stopped going on nights out with my friends because it hurt to wear heels and I just felt frumpy,” she said.

So when Marianne heard about the ASCOT trial at the Robert Jones and Agnes Hunt Orthopaedic Hospital in Oswestry, she felt she had “nothing to lose”.

Since having her treatment, Marianne’s life has transformed for the better. “A typical day now is so different to how it was when the pain was bad. I actually want to get out of bed now. I get up, have breakfast and head straight to the gym for an hour,” she said.

ACI is now available on the NHS. This means that more people across the UK can access ACI and its benefits. However, it is only offered to specific patients, usually those with small areas of cartilage damage or early osteoarthritis, as set out by NICE guidelines. You can speak to your GP or consultant to find out more.

ACI has been a great success, but we’re continuing to push for better treatments for people with osteoarthritis. Researchers at the Tissue and Engineering and Regenerative Therapies Centre Versus Arthritis are now conducting a clinical study called ASCOT, which is exploring whether stem cells can be used alongside (or instead of) cartilage cells in a procedure similar to ACI.