Osteomalacia means soft bones. Bone is a living, active tissue that’s continually being removed and replaced. This process is known as bone turnover. Bone consists of a hard outer shell (the cortex) made up of minerals, mainly calcium and phosphorus, and a softer inner mesh (the matrix) made up of collagen fibres. 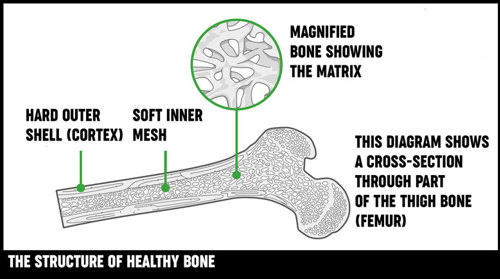 When normal bone is formed, these fibres are coated with mineral. This process is called mineralisation. The strength of the new bone depends on the amount of mineral covering the collagen matrix. The more mineral laid down, the stronger the bone.

Osteomalacia happens if mineralisation doesn’t take place properly. In osteomalacia more and more bone is made up of collagen matrix without a mineral covering, so the bones become soft. These softened bones may bend and crack, and this can be very painful.

There are rarer types of osteomalacia. These are usually due to problems in the kidneys which result in loss of phosphorous from the body. This is sometimes inherited and passed from parents to their children in their genes, but can also happen with other kidney problems and occassionally as a side effect of treatment with some drugs.

Anyone who’s lacking vitamin D is likely to develop osteomalacia. Although we can get vitamin D from foods, most of our supply of vitamin D is produced by the body itself. Cholesterol, which is present naturally in the skin, is converted to vitamin D through the action of sunlight on the skin.

The people most at risk of osteomalacia are those who aren’t able to produce enough vitamin D through exposure to sunlight because:

Some people from Asia, particularly from the Indian sub-continent and surrounding region, are particularly at risk of osteomalacia. We don't yet know why this is the case, but it's likely to be due to a combination of factors. The skin of people from this region doesn't absorb vitamin D as well in cooler climates, and women who wear clothes that cover all their skin for religious reasons (such as a burka) will expose their skin less to direct sunlight.

Some foods commonly used in Asian diets are poor in vitamin D, and there may be chemicals within the diet which prevent vitamin D absorption - for example it's thought that chapatti flour may prevent the normal absorption of calcium from the stomach, though some chapatti flours now have vitamin D added to help calcium absorption.

Many people from the Indian sub-continent and surrounding region are lactose intolerant and so they may not be absorbing enough calcium.

People whose diet is lacking in vitamin D and/or calcium may be at risk, especially if they're also unable to produce enough vitamin D in their skin.

Osteomalacia, particularly when caused by a lack of vitamin D, can result in:

Bone pain is felt most often in the legs, groin, upper thighs and knees, and sometimes in the feet when you stand, walk or run. Sitting or lying down to rest can often ease the pain. Sometimes a minor knock on a bone such as the shin will feel unusually painful. As the condition gets worse, pain can be felt everywhere and simple movements can hurt.

Muscles may become weak or feel stiff. The weakness tends to affect the thighs and the muscles in the shoulders and main trunk of the body. This can make it difficult to climb stairs, get up from a chair without using the arms for support and, in very severe cases, get out of bed. 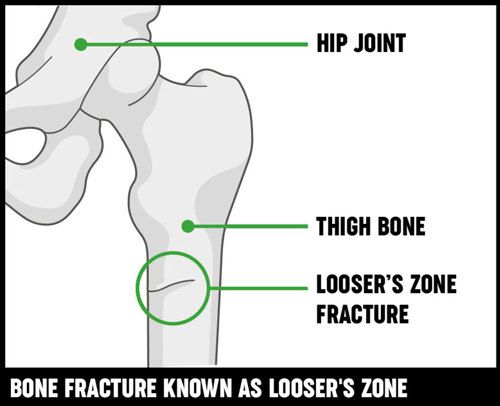 Partial fractures linked with osteomalacia are called Looser’s zones, which can cause pain. Occasionally, these cracks can lead to full breaks (complete fractures).

In the much rarer inherited form of osteomalacia, muscle weakness is less common. The main problem is that mineral laid down in the ligaments and tendons around the spine, hips and shoulders makes it difficult to move these joints.

To allow bone mineralisation to take place the body needs enough minerals (calcium and phosphorus) and vitamin D. If the body doesn’t have enough of any one of these, osteomalacia will develop.

However, not having enough calcium is very unusual as a cause of osteomalacia in Western countries. Certain rare disorders can cause normal kidneys to lose phosphorus, which causes osteomalacia, but the most common cause of the condition is a lack of vitamin D.

Although lack of vitamin D is the most common cause of osteomalacia, your doctor will need to check that it’s not being caused by anything else. Rarer causes include:

If any of the above applies to you, you may need additional protection against osteomalacia. It’s important to talk to your doctor about this.

How will osteomalacia affect me?

The outlook is very good, as most people with osteomalacia will recover with treatment. However, it can take months for bones to recover and for muscles to become strong again.

A late diagnosis can make recovery more difficult, especially if bones have fractured.

Because the symptoms of osteomalacia are often not very specific, it can be some time before the condition is diagnosed. Your doctor may ask you about your diet and any family history of bone disorders. It's common for people to have osteomalacia for two or three years before it's diagnosed.

Blood tests will be able to rule out some of the rarer causes of the condition, while an x-ray may show any cracks or fractures in the bones.

Treatment will cure osteomalacia in most cases, but easing bone pain and muscle weakness may take several months.

If the disease is caused by a lack of vitamin D, daily doses of 20–50 µg/800-2,000 units vitamin D are often used, but some doctors may give larger doses to start off with. Calcium supplements of 500–1,000 milligrams (mg) a day may speed up bone healing if your calcium intake from your normal diet is below 750 mg a day.

You’ll usually need daily supplements of vitamin D over a long period of time if there isn’t an obvious, curable cause for your osteomalacia. If you stop taking vitamin D, the condition may return.

Once you begin treatment for the condition any cracks in your bones will heal normally, though you may need painkillers in the meantime. You should avoid intensive exercise until the cracks have healed.

People with kidney failure or inherited forms of osteomalacia often need lifelong support from their doctor. They'll need to be monitored regularly in a hospital-based specialist unit. They’ll usually need special forms of vitamin D such as calcitriol tablets. This is because the kidney normally convert ordinary Vitamin D to calcitriol, which is the form of the vitamin needed for bone mineralisation.

There are many things people can do to promote healthy bones. These include:

Exercise helps to strengthen the bones, especially weight-bearing exercise (anything that involves walking, running or lifting weights). However, you should avoid intensive exercise while any fractures or cracks in the bones are healing.

Read more about exercise and arthritis.

Where possible, going outside and exposing your arms and face to sunlight is the best way to get vitamin D. From June to August just 15 minutes a day is generally enough. Don’t allow your skin to go red and take care not to burn, particularly in strong sunshine and if you have fair or sensitive skin.

A diet that includes vitamin D and calcium can help, but this won't prevent the condition by itself. Nevertheless, a diet that provides vitamin D is especially important for those who don't get enough exposure to sunlight.

Oily fish such as mackerel, salmon and herring are the best dietary sources of vitamin D, while dairy products are the best sources of calcium. A dietitian will be able to advise you if you’re unable to get calcium and vitamin D from these sources.

Because we don't get enough sunshine all year round in the UK, and because it's difficult to guarantee getting enough vitamin D from what we eat, Public Health England recommends that everyone should take a 10 microgram supplement of vitamin D every day during the autumn and winter.

People in certain groups at risk of not having enough exposure to sunlight, or whose skin is not able to absorb enough vitamin D from the level of sunshine in the UK, are encouraged to take a daily supplement of 10 micrograms all year round.

Read more about diet and arthritis.

We use cookies to give you the best experience. By continuing to browse this site you are agreeing to our use of cookies.