Your feedback in action

We are incredibly excited to introduce you to our brand-new version of Arthritis Tracker. We’ve packed an awful lot into one update. This new release means you can now:

We’ve been working hard in the background to make these improvements. We want to say a huge thank you to everyone who got in touch to tell us what improvements are most important to you and took part in surveys and focus groups to help us make sure the body map is useful and easy to use.

If you have any questions about the updates we are making, have a look at our user guide or reach out to us at apps@versusarthritis.org.

Getting ready for some exciting changes

Changes that are happening now (August 2021)

If you have any questions about the changes we are making, you can email us at apps@versusarthritis.org.

Thank you to everybody who reached out, and requested the ability to add notes about your day. We’ve listened and this feature is now available in the app. To get started, just scroll down to the bottom of the “Today” screen and you’ll see the new “Add a Note” button. 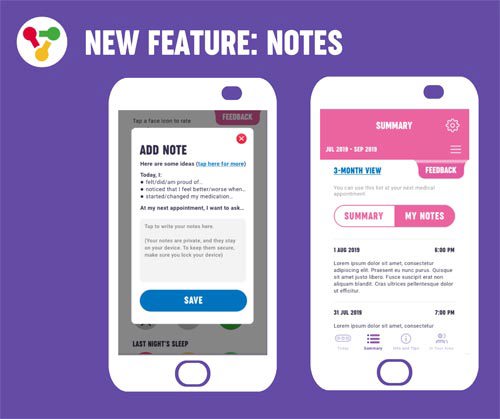 Coming up next year:

The Information and Tips page has a fresh new look! It’s now easier to browse the topics available, and discover helpful tips and information using the accordion-style format. We hope you like it as much as we do.

We have added two new topics to the Information and Tips section:

These new buttons lead to a helpful video explaining a little more about these conditions. 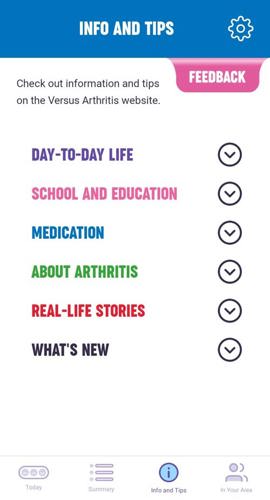 Tracking where is sore: Part 1 of our improvements

Thanks to the incredibly helpful feedback we receive, we know that we need to make it easier for people to track where is sore, particularly for people who often track multiple painful joints in one day. This is a big priority for us, and we are working on potential solutions.

In the meantime, we have made a few adjustments to help make it easier to navigate the drop-down menu for selecting where is sore. You can now select a category such as legs, arms, head or torso, which then provides you with a smaller list so that you can find the joint you’re looking for quicker.

This is part one of the improvements we are making to this part of the app. Keep an eye out for future improvements here, or join the feedback network by emailing apps@versusarthritis.org to get involved in improving this section. 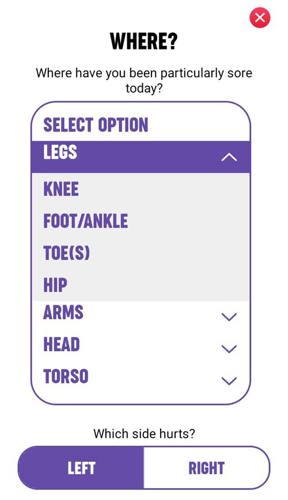 Many of you have used the feedback form to let us know how we can make the app better. We wanted to make sure that you can access information about the improvements we’ve made, so that you can see your feedback in action.

Now, when you tap on the pink “Feedback button” you will have the option to “Give Feedback” or see “Improvement’s We’ve Made” – which will bring you to this very page you are on now! 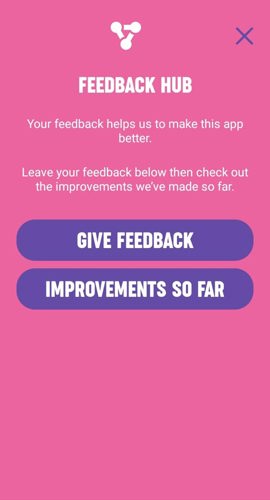 This will be particularly helpful for people who have their health appointments spread out roughly every three months, in order to compare how they have been feeling leading up to this appointment compared to the previous appointment.

Fixing a bug for iPhone users

Thank you to those who got in touch to let us know that you were having a problem with the app. Thanks to the detailed feedback you gave us, we were able to investigate the problem, and come up with a solution. This issue should now be resolved! Remember if you have any problems using the app, you can always contact apps@versusarthritis.org and we will try our best to help you.

How to tell us if the Arthritis Tracker has stopped working

If the app has stopped working for you, we’re sorry to hear that. We would like to help you as best we can.

Do not uninstall the app yet

It’s important that you do not uninstall Arthritis Tracker off your phone, as this will mean you will lose the data you’ve been tracking on the app. In the future we will be adding the ability to back-up your data, however this is not currently available.

Things you can do:

Reviewing the name for the app

We’ve listened to your feedback and ideas to improve our app.

Thank you to the health professionals and young people who told us that the name ‘Arthritis Tracker for Teens’ is harder to relate to for older teenagers and those in their early twenties, who also use the app.

We knew this was something we needed to change and so we took the opportunity to review the name.

We asked young people, Versus Arthritis staff and a team of experts to come up with some new name suggestions.

From this we ended up with a long list of possibilities, which whittled down to a shortlist of five, including a shorter version of the original ‘Arthritis Tracker’.

We left it completely up to young people to vote for the name they wanted and a few weeks later, the results were in!

Our standout winner was ‘Arthritis Tracker’, a simplified version of the original name which is inclusive for both teens and young adults and describes exactly what you get from the app.

Thank you to everyone who voted and gave us feedback on what the app should be called.

Improving the ‘getting started’ screens

When you download an app for the first time, you’re usually greeted with a ‘welcome’ journey. These screens show you how the app works, so you feel confident in using it.

We’ve given the welcome screens a re-fresh, added a big splash of colour and some ‘Getting to know you’ screens.

A splash of colour

Have a look below to see how colourful these welcome screens now look: 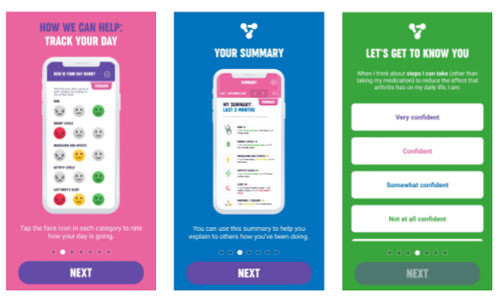 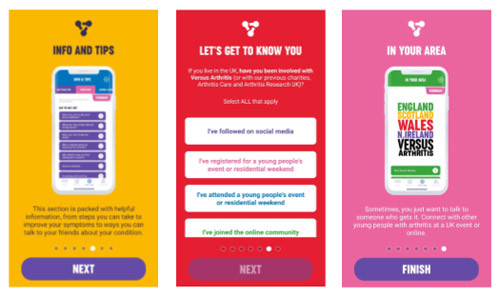 We’ve added three new questions onto the welcome screens. These include:

These questions will help you to reflect how the app might benefit you personally and it will signpost you to useful sections of the app.

The questions will also help us to measure the difference the app is making.

A new feature: tracking where you feel your pain

We’ve had a lot of requests for the ability to track where is sore, not just if you’ve been sore.

This was already on the top of our ‘to do’ list and we’re pleased to announce it’s ready and live on the app.

Now, when you tap the sad face within the ‘pain’ section (e.g. you’ve had a painful day), a box will pop up allowing you to add multiple joints that have been sore.

How you can help us prioritise future improvements

Your opinions and feedback are vital in helping us make this app better.

Over 100 young people and health professionals have contributed to this app in some way, and we would love to hear from you too.

Tell us what you think

Filling in a survey is one of the simplest and most helpful ways you can help us develop the app.

Whether you are a young person, parent or health professional, please take a few moments to share your opinion by clicking the link below.

How to provide general feedback

If you are using the app, tap the ‘feedback’ button to share your ideas about how the app can be improved, or email apps@versusarthritis.org.