Let’s make sure the Government doesn’t, either. 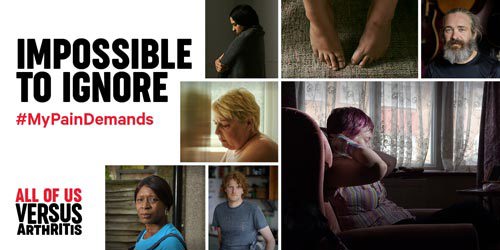 It's not 'just aches and pains', and it's not 'just wear and tear’. It’s not alright – it’s arthritis, and it can steal someone's family life, independence and even the ability to move freely.

For many, the pandemic has made living with arthritis even harder. With appointments, treatments and joint replacement surgery delayed, people with arthritis face worsening pain and impacts to their physical and mental health that are impossible to ignore.

People with arthritis need clear communication about when they will be treated and the assurance that they can receive care and services safely.

As UK Governments respond to the pandemic and plan for the future, we must ensure that people with arthritis are not left behind, struggling in pain. Our campaign demands action from UK Governments and health bodies to address the life-limiting pain of arthritis.

Our Impossible to Ignore campaign's calling for:

The widespread cancellation of planned operations over the pandemic has left hundreds of thousands of people with arthritis across the UK waiting in unbearable pain for joint replacement surgery.

Over 46,000 of us have signed the Versus Arthritis petition calling for urgent government action to bring down waiting times and ensure people waiting for joint replacements have ongoing communication and get the support they need now. People with arthritis waiting in pain for surgery have been patient long enough. It’s time we made our voices heard, louder and clearer than ever before. In July 2021, we handed in our petition to governments across the UK. Read more about it here.

Recent announcements from governments across the UK of more funding for the NHS to tackle the essential surgery backlog is welcome, but experts have warned it’s going to take a long time to bring waiting lists down.

We need decisive action from governments across the UK to ensure that people with arthritis waiting for surgery get vital support right now, and money allocated to tackling surgery backlogs will be spent at a pace they can see results. Clearing the joint replacement surgery backlog must be prioritised, and people must not feel abandoned or left unsupported whilst they wait.

UK politicians must act now.
Watch and share the video to find out more:

Together, we are impossible to ignore

To view the Welsh language subtitled version of the video above, please click here.

As waiting times for joint replacements reach record levels, it’s vital that everyone with arthritis waiting for surgery has access to support to manage their pain and distress, alongside improving health and wellbeing.

In June 2021, we launched our call for local health services to urgently implement a six-point package of support for those waiting for joint replacements.

Read more about our campaign here.

WHAT TO DO IF YOU’RE WAITING FOR TREATMENT

Our achievements so far

In February 2022, in a major development for the Impossible to Ignore campaign, the Westminster government released detailed plans to tackle the elective surgery backlog in England.

This was one of the main demands outlined in our Impossible to Ignore petition, which was handed in to governments across the UK in July with an amazing 46,077 signatures.

With this announcement, we now have national plans in place to tackle the surgery backlog in England, Scotland, Wales, and Northern Ireland. Securing these plans is testament to the tens of thousands of supporters who have taken action – from signing our petition, taking our surveys, and emailing their elected representatives.

Our demands are being heard.

However, it doesn’t stop here. Now we have plans in place across all four nations, we must push forward our campaign to ensure that these government commitments lead to change as soon as possible, and that people with arthritis who are facing an agonising wait for surgery will see the benefits. This must include making sure treatment and support is accessible to all, rebuilding the NHS's capacity and, vitally, establishing sustained investment and the right resources to ensure it delivers for people with arthritis.

You can read our full response to the announcement here: Our response: Elective recovery plan announced for England.

Our campaigning and influencing work has been shaped by more than 9,000 lived experiences of arthritis, gathered through surveys and personal stories. People with arthritis have told us what matters and we have shared this with policy-makers and politicians across the UK.

“It hasn't quite sunk in yet, but there is light at the end of the tunnel. I know recovery will be hard, but I am pretty experienced with pain now. I honestly do not think I would have had the confidence to pester them about it if it was not the advice and encouragement.” - Chris, 48, who recently had joint replacement surgery.

Our Impossible to Ignore campaign has been pushing arthritis up the political agenda and made headline news across all four nations.

In total, our work has been supported by over 250 politicians from Westminster and the Devolved parliaments.

Here are some of our highlights from the past year: